Beneficial Ownership and Tax Residency – A Tool for Tax Planning or Tax Avoidance?

In cases where no tax treaty is in place, the income may be taxed in the home country (basis tax residency) as well as in the source country (where income is earned) leading to double taxation of the same income. Many cases have been reported where a person acting through a legal entity has obtained treaty benefits “improperly” by forming layers of entities which would not be available to such person directly. This is generally done in case of passive income i.e. Dividend, Royalty or Interest Income. Let us understand this with the help of an example: 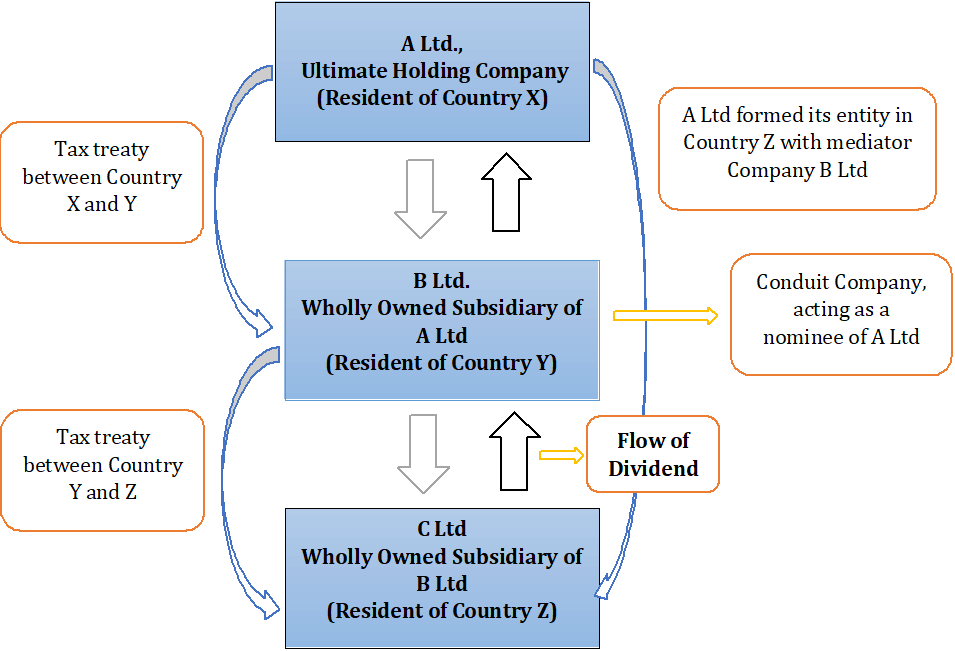 The profits earned by C Ltd are delivered to B Ltd by way of dividend and B Ltd in turns distributing the dividend to A Ltd. Hence, in this way, A Ltd has reduced its tax liability (which it would be liable to pay if it had directly invested in C Ltd) by availing the benefit of tax treaty entered between the Country Y and Country Z.

The entities who acts as a medium for channelizing income from other sources are termed as “Conduit Company”. In the given case, B Ltd is a conduit company.

The term “Beneficial Owner” is nowhere explicitly defined under the Income Tax Act and in the tax treaties. However this term is being used significantly under various provisions and is considered as a benchmark to test whether the beneficial provisions of tax treaty should be provided to tax payers.

However, under civil and common law and as explained by Organisation for Economic Co-operation and Development (OECD), beneficial owner for the purpose of tax treaty, is a person who is the ultimate beneficiary of income and also has a control over it i.e. a person who receives the income for its own use.

The Government of India has emphasized on word “beneficial owner” in double taxation avoidance agreements (DTAA) entered with various countries for providing treaty benefits implying its intent to provide tax benefits only to beneficial owner only.

This regime acts on the principle of agent or nominee relationship. An agent or a nominee receiving any income on behalf of his principal are not provided any exemption or relief, since they are acting as a mediator to channelize the income from other sources and are not the actual owners of the income. Hence, it may be interpreted as inconsistent with the intent of law to provide them relief only due to their status of residency. Fundamentally, the tax treaty aims to provide benefit to those only who are the ultimate owners of the income by reducing their tax burden.

Likewise, conduit companies may also be considered as having only acted as an intermediary for the parent company as they may be held as not having beneficial interest and accordingly exemption or relief provided under tax treaties may not be available to it. Let’s understand the same through below decided cases:

There have been many instances domestically as well as internationally where the Companies have availed the benefit of tax treaties by forming chain of complex corporate structures. Some of the case laws are listed below:

The tax authority stated that since the companies are required to deduct Dividend Distribution Tax (DDT) on payment of dividend, it is not taxable in the hands of shareholders. Therefore, if Pieburg India has paid the DDT to the tax authorities, dividend would not be taxable in India in the hands of receiver i.e. KSPG or the ultimate holding company.

Further, as per the India-Netherland treaty, tax on capital gains cannot be levied and collected by Indian Tax Authorities. However, the questions were raised on the beneficial ownership of such gain. It was contemplated that since the German Company was ultimate holder, India-Germany treaty would be applicable.

The authority desisted to give a ruling and envisaged that merely by its holding a Company cannot be termed as “Conduit Company” as both the entities have its own legal entity.

Hence, for the time being, unless the transfer actually takes place, it was considered that the KPSG is not liable to pay tax on capital gains.

In the light of aforementioned rulings, it can be observed that judgement of courts are truly based on the facts of cases since there is no clarity what would construe as beneficial owner.

In the example given above, where B Ltd is acting as a conduit for A Ltd and re-distributing the dividend received from C Ltd. to A Ltd. would be eligible to claim benefits of tax treaty if we rely on the judgment in case of Prevost Car Inc. Vs. The Queen provided B Ltd is able to prove itself before tax authorities as being beneficial owner and not just working as a conduit company. However, the same can vary depending on the circumstances and facts of the case.

Considering the above, one can truly understand the essence of provisions related to beneficial owner only when proper law would be enacted by the Government under taxation laws or definition is included in DTAA. The law would certainly bring more clarity and transparency.