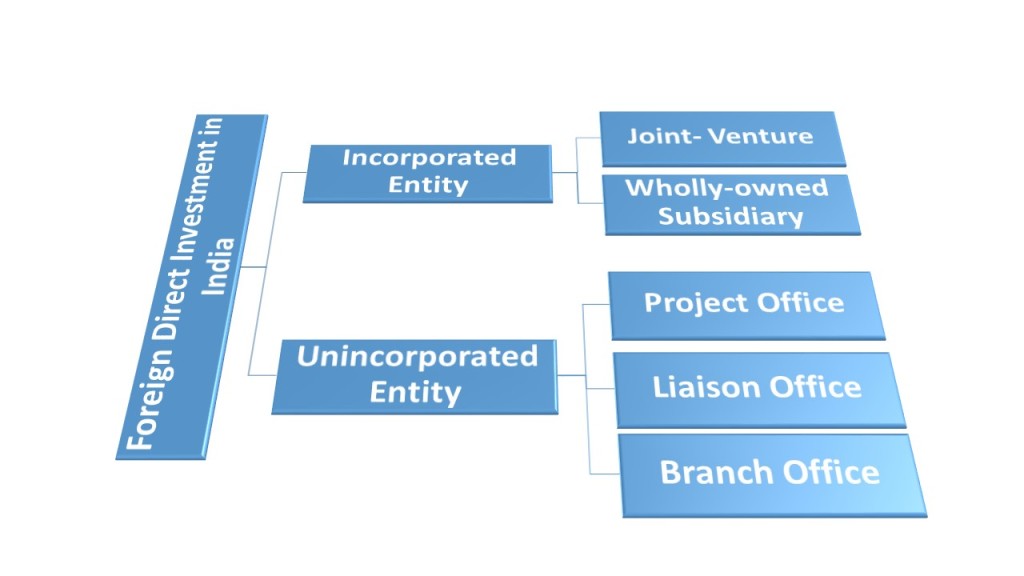 What is the sectoral cap in the sectors where FDI is allowed?

Permitted sectors are as follows:

Besides the above, FDI is not allowed in any other agriculture sector.

What are the different routes to enter into India?

An Indian company may receive Foreign Direct Investment under the two routes as given under:

FDI is allowed under the automatic route without prior approval either of the Government or the Reserve Bank of India in all activities/sectors as specified in the consolidated FDI Policy, issued by the Government of India from time to time.

FDI in activities not covered under the automatic route requires prior approval of the Government which is considered by the Foreign Investment Promotion Board (FIPB).

Application can be made in Form FC-IL, which can be downloaded from this link.

The Indian company having received FDI either under the Automatic route or the Government route is required to comply with provisions of the FDI policy including reporting the FDI to the Reserve Bank.

Which are the sectors where FDI is not allowed in India?

FDI is prohibited under the Government Route as well as the Automatic Route in the following sectors:

What are the modes of payment allowed for receiving Foreign Direct Investment?

Is there any time limit to issue shares /convertible debentures under FDI Scheme?

Further, Reserve Bank may on an application made to it and for sufficient reasons permit an Indian Company to refund / allot shares for the amount of consideration received towards issue of security if such amount is outstanding beyond the period of 180 days from the date of receipt.

What are the instruments for receiving FDI in an Indian Company?

What is the procedure to be followed after investment is made under the Automatic route             or with Government Approval?

A two-stage reporting procedure has to be followed:

What are the ways a person Resident in India can transfer securities to a person   Resident outside India? What are the reporting obligations?

A person resident in India can effectuate transfer of securities in the following manner:

The transaction should be reported in the form FC-TRS to the AD Category – I Bank,     within 60 days from remitting the consideration. The onus of submission of such form would be on the person residing in India, transferor or transferee, as the case may be.

What are the guidelines for transfer of existing shares from Non Resident to Residents     and vice versa where government approval is not required?

General permission has been granted to non residents for acquisition of shares by way     of transfer subject to the following conditions:

Can a foreign investor invest in Preference Shares? What are the regulations applicable   in case of such investments??

Can a company issue debentures as part of FDI??

Yes. Debentures which are fully and mandatorily convertible into equity within a    specified time would be reckoned as part of share capital under the FDI Policy.

An Indian company is eligible to issue shares under the FDI policy to a person resident  outside India against Lump Sum fee, Royalty, ECB , Import of capital goods / machineries / equipments and Pre-operative / pre-      incorporation expenses, provided that the foreign equity in the company, after such conversion, is within the sectoral cap.

Further, on a review in September 2014, it has been decided that an Indian investee company may issue equity shares against any other funds payable by them, remittance  of which does not require prior permission of the Government of India or Reserve Bank  of India under FEMA, 1999 or any rules/ regulations framed or directions issued  thereunder, provided that:

What are the other modes of issues of shares for which general permission is available  under RBI?

Other modes of issue of shares are as follows:

Besides simplifying the FDI Policy, the eBiz initiative, piloted by Department of Industrial Policy and Promotion on 19th February, 2015, was launched by the Government of India to simplify the process of starting a business in India through eBiz portal. eBiz is India’s one-stop-shop of convenient and efficient online Government-to-Business (G2B) services. The core theme of eBiz lies in radical shift by Government in its service approach, from being department-centric to customer-centric, in providing services to the business community.

eBiz is a collaborative effort involving government at the Central, State and municipal levels. It will dramatically reduce the complexity in obtaining information and services related to starting and operating a business in India.

Using eBiz one will be able to:

Below is the list of 11 services currently available on eBiz portal: